She delights in playing unconventional characters but also loves a good solid hero. Her commitment to the characters she is entrusted with shows in her devotion to examining each individual and finding what makes them tick.
"...any time it's from Brienne's point of view deWard kills it."
- When I Was You. Brian's Book Blog, 2020

"The first-person narrative is told by Linden, the only female character, whose wit and vulnerability are perfectly captured by Erin deWard."
- Symphony of Light and Winter. AudioFile Magazine, 2017

"I sat in the car listening pretty much slack-jawed as Noah and Erin rocked this audio and they both earned a place in my top 5 narrators/pairings."
- Curing Doctor Vincent. Dee's Book Blog, 2016

"The narration done by Erin deWard was nothing short of perfect for this book.  Her performance really gave this book wings and allowed it to take on another emotional level."
- Pandemic Diary. AudiobookReviewer.com, 2016
SoundCloud Page for more samples
​
Erin's Audible Catalog 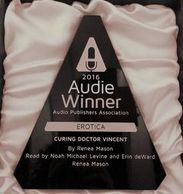 ​Erin is the owner and operator of deWord Audio located in lovely Nyack, NY, just 27 miles from New York City. deWord specializes in audio description, audiobook narration, and voice work for all kinds of media. With a small stable of professional voice actors, deWord collaborates with clients to bring their imagined projects to life.

The studio is a box within a box equipped with a Neumann TLM 102, (sometimes a Blue Spark XLR), DBX channel strip, Scarlett 2i2, Mac Mini, Reaper, Studio One, RX6, and Audacity.

Erin has had the on-going good fortune to study audiobook narration with Paul Alan Ruben. She has also studied narration with Eliza Foss, Jayme Mattler, PJ Ochlan, and Carol Monda and has studied Audio Description with Joel Snyder and the Kennedy Center Leadership Exchange in Arts and Disability. Erin has also taken a Video Game Voice Over intensive with Melanie Ehrlich (co-presented by Dom Vega and Than Bryan of Avalanche).